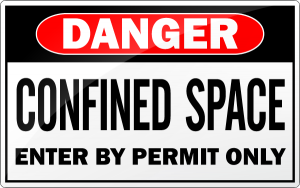 Confined Space Issues dominated the list of 11 major violations, including two willful against Dedicated TCS, LLC  OSHA  proposed penalties of $142,000. An OSHA inspection at the one facility in Lansing, Illinois was initiated after a complaint was received. The facility  cleans tank trailers.

Gary Anderson, OSHA area director in Calumet City stated, “A confined space has limited or restricted means for entry or exit, and it is not designed for continuous employee occupancy, which makes monitoring workers’ activities in these spaces vital to their safety and health. OSHA is committed to protecting workers on the job, especially when employers fail to do so.”

Confined Space Issues Are Preventable If Proper Procedures Are In Place.

The OSHA permit-required confined space standard provides procedures to protect workers from confined space issues.  Especially in danger are those who enter, work in, or exit confined spaces that hinder their activities. The configurations of these spaces can increase workers’ exposure to hazards which include entrapment, engulfment, and/or hazardous atmospheric conditions, all of which could lead to serious injury, illness, or death.

Two willful violations regarding confined space issues were found at the Lansing facility. The first was  for failing to provide a mechanical lifting device that could help rescue workers from confines spaces. The second was for failing to provide an attendant to monitor the safety of workers operating within permit-required spaces. Willful violations are ones committed with intentional knowing or voluntary disregard for the law’s requirement, or indifference to worker safety and health. OSHA has clear and extensive standards for confined space issues in the work place.

Nine serious violations were found, seven of which also related to confined space issues. The violations include:

Dedicated TCS, LLC is based in Lansing but also has facilities in Channahon, Illinois and in New Orleans, Louisiana. Their Channahon facility received eight serious citations in September which were also primarily related to permit-required confined space violations. The company has 15 business days from receipt of the citations and penalties to comply, request an informal conference with the OSHA area director, or contest findings before the independent Occupational Safety and Health Review Commission.

OSHA has a toll-free hotline at 800-321-OSHA (6742) to report workplace incidents, fatalities, or situations which pose imminent danger to workers.