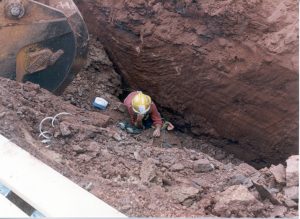 On December 15, 2016, a fatal trench collapse at a residential Belton site took the life of an employee from Missouri-based Arrow Plumbing. Shortly thereafter, OSHA began an investigation of the incident. Nearly one month later, on January 20th, 2017, agency inspectors discovered that another Arrow employee was working in identical conditions in an unprotected trench, at another residential site. No employees were injured at the site of the second incident, though a secondary investigation was initiated and subsequent violations and citations were processed.

In both cases, OSHA determined that Arrow Plumbing LLC failed to provide safeguards for the prevention of trench collapse and did not provide cave-in training for employees. OSHA cited Arrow Plumbing for six willful and eight serious violations of workplace safety standards and proposed $714,142 in penalties.

Among the violations found at each site, were:

A fatal trench collapse is unfortunate and always preventable. One factor that compounds the natural dangers of a trench collapse is the fact that most sites feature entry into a confined space for the employee tasked with working in the trench. Confined spaces feature a very small margin of error for the prevention of fatality, as oxygen levels rapidly decrease with the increasing depth of the space. Another obvious factor is the distance that a potential fall could represent; the fall, alone, in a trench could prove fatal. Because of the inherent danger of confined space work, safety leaders would be wise to utilize a resource such as an online training course to ensure the safety of their respective employees and to maintain compliance with agency standards.