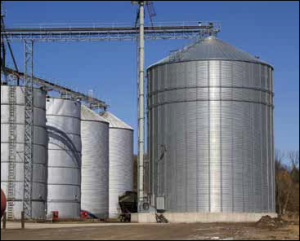 Entering grain storage bins can be a very dangerous activity and requires following safety procedures to prevent potentially fatal hazards. The atmosphere inside the bins can sometimes be toxic and lack adequate oxygen. There is also a danger that workers can be engulfed by grain and suffocate as a result. In many cases, the grain storage bin dust can combine with available oxygen or other material to cause intense flash fires.

Grain storage bins are configured in such a way that they fall under OSHA’s Confined Space Entry standards in 29 CFR 1910.146 and the new 1910.146 Subpart AA for Construction worksites. Companies that store, install or maintain these bins should undergo General Industry confined space training or, if applicable, Construction Industry training  as a cornerstone to an overall, compliant safety program.

The following safety procedures should be followed when entering grain storage bins:

The hazard of engulfment within grain storage bins can be caused by several different situations. “Walking down” grain can result in the grain acting like quicksand and a worker can become buried within a few seconds. Another cause of engulfment is known as bridging. This occurs when a worker stands on or below “bridged” grain, which is grain that has clumped together due to moisture or mold. There can be empty spaces below the clumps that can cause the bridged grain to suddenly collapse under the weight of a worker, causing the worker to become buried in the grain storage bins. Grain which has accumulated on the sides of a bin can suddenly collapse onto a worker. Sometimes workers are instructed to dislodge the grain from the bin’s sides and it will collapse during this procedure. Often when other workers attempt to rescue a coworker who is buried in grain, they also become victims.