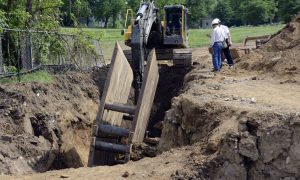 The United States Department of Labor’s Occupational Safety and Health Administration was recently prompted to perform an investigation as a result of a February 22nd, 2017 incident in South Huntingdon, Pennsylvania. A young man, Adam Skokut Jr., was involved in a residential trench collapse, while working in a confined space, to install a septic system with his father, Adam Skokut Sr. The OSHA investigation is ongoing and no formal citation or statement has been released by the agency.

The incident, which occurred at roughly 9:30AM on February 22nd, prompted the dispatch of the county’s Trench Rescue and Structural Collapse Team. The unit’s coordinator, Bill Watkins, said that trench-collapse can, “happen in one-half of a second”, and remarked that there did not appear to be a trench-box or wall-security shield used in the project.

The cause of death was determined as compression suffocation as a result of the trench collapse.

OSHA Pittsburgh Regional Office assistant area director, David Rhodes, said, “There is no further specific information we can release at this time.” OSHA Philadelphia Office representative, Leni Fortson, stated that the agency has, “begun an investigation into the fatality”. A public report should be available within 60 days.

OSHA requires trenches which are five feet or deeper to incorporate a protective system, unless the excavation site is entirely in stable rock. For trenches less than 5 feet deep, a competent person may determine that a protective system is not required.

Confined space accidents are among the most fatal and unstable, when underway. For this reason, preparation and pre-emptive appraisal of any worksite involving a confined space, especially those which involved confined spaces which are deeper than ten feet, is of the utmost importance. One resource that safety leaders can utilize to ensure the safety of their employees and OSHA compliance, is an online confined-space training course.